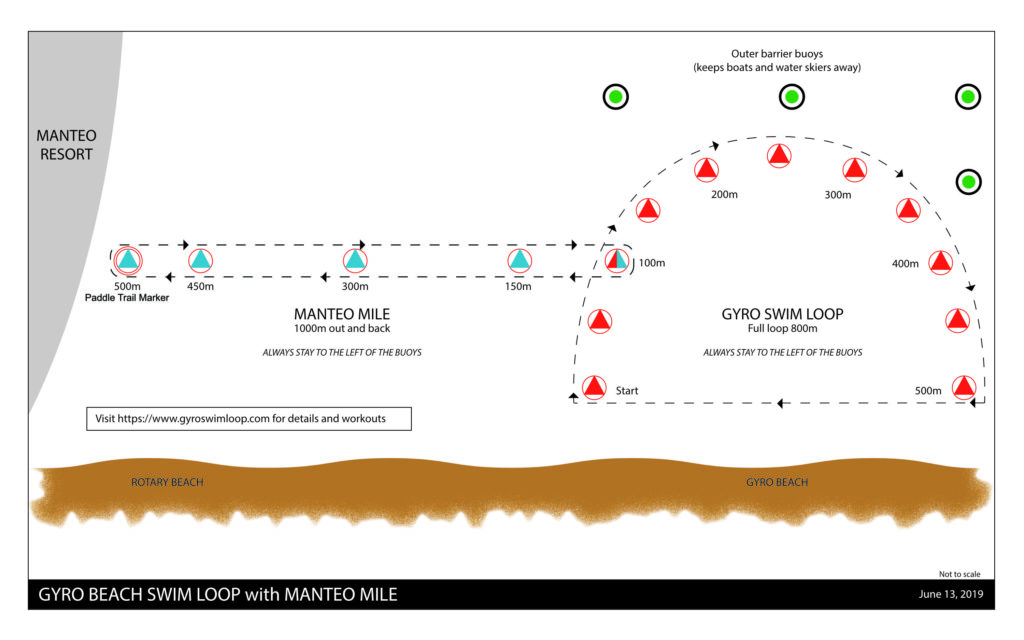 The "other" Open Water swim

Yes it is true: Besides the Gyro Loop that this website is dedicated to, there has been another (out-and-back) open water swim at Gyro Beach that was formalized a few years after the Loop was established.

Soon after the Loop was created, some creative local swimmers started exploring adjacent areas for other open water swims, most notably in the direction of Rotary Beach and the Manteo Beach Resort, both directly south of Boyce Gyro Park, home of the Loop.  Since the long sandy shelf that underpins the Gyro Loop extends south all the way to these locations, swims to Rotary beach and back made for an enjoyable swimming “safari”, as the water’s depth remains about the same as that seen at the outer half of the Gyro Loop, with boat traffic being as sparse.

In 2013, the City of Kelowna agreed, and funded the purchase of 4 new blue-topped buoys that marked a straight line from the Gyro Loop’s 100m buoy to a spot in front of the Manteo Beach Resort property.  Three of these buoys were marked with distances “150m”, “300m”, and “450m”, and a fourth one was larger, and at a further 50m from the last buoy, indicated the turnaround buoy, a total distance of about 500 meters from the Gyro Loop, for a 1000 meter round trip.

Although this swim adds one kilometer to a morning swim at Gyro, it has always been called the “Manteo Mile” (perhaps because the alliteration sounded better?).  Or perhaps more likely, it was initially estimated to be a mile of swimming, before the swim was formally GPSed and found to be shorter.  In any event, long time swim coach Nick Rabinovitch gets credit for its name.  And it continues to be thought of as a bit of a “safari”, since there is an annual growth of Eurasian milfoil at the far end of this swim that feels a bit like a jungle by the end of every summer (this growth is usually cleared every spring). Thus the swim is best in early to mid-summer, before the weeds become too substantial, and before the lake levels drop too much to swim over the weeds.

Since its inception, the Manteo Mile has had an interesting history.

In the winter of 2015, the turnaround buoy was destroyed by wind and wave action, and without a sponsor, was never replaced.  However, with the establishment of the Okanagan Paddle Trail in 2018, a new paddle trail beach marker buoy was placed where the Manteo Mile turnaround buoy had been, so now swimmers can sight for a similarly sized buoy when doing this swim.

Since Rotary beach is home to the City’s kiteboard and windsurfing enthusiasts, there has been some concern that open water swimmers would be at significant risk of injury when swimming through this area.  However, since most open water swimmers swim early in the morning (usually between 6-9AM), while the kiteboarders and windsurfers only get on the water when the wind picks up (usually in the afternoon), there is almost no overlap of use between these groups.  Further, when the wind blows, the waves make open water swimming difficult, and therefore swimmers are less likely to swim at all, let alone do a swim safari to Manteo.

When the Manteo resort expanded with the purchase of a neighboring property and the development of a large new marina, the City of Kelowna commissioned the Royal Lifesaving Society to assess the potential conflict of new boat traffic from Manteo with open water swimmers.  The report raised concerns about safety, and advised the City not to sanction the Manteo Mile swim course.  However, the authors of the report, who did not actually attend or experience the area (they limited their exploration to Google Maps), much less try swimming the Manteo Mile prior to writing their report and drawing their conclusions, failed to appreciate the lack of overlap of time usage between swimmers and boaters: Swimmers doing the Manteo Mile are out of the water and done for the day by 9AM, while boaters are rarely out of their beds by that time.  For those most familiar with using this swim course, the risk of boat interaction to swimmers is all but nonexistent, especially since boaters do not like risking damage to their boat where the water is shallow, where there are weeds growing, and where buoys and chains abound.

For those that chose to swim the Manteo Mile, the City has given our open water swimming community full ownership and responsibility of this swim course.  So we have to present this caveat:  While we continue to believe that the Manteo Mile is a safe swim course, we believe that to be the case only early in the morning, before 9 AM, when it is not windy, before most boaters are out.  At all times, just like the Gyro Swim Loop. swim it at your own risk, being wary of power boats especially, since many boaters remain unaware of what buoyed areas mean, and many are not even aware that open water swimming is a recognized sport (every summer there are even power boats seen in the Gyro Swim Loop, often anchoring to one of the marked buoys).  Swimming with a personal swim buoy along this course may help to allay your fears and concerns about boats affecting your open water swim.

A copy of the full Royal Lifesaving report is below.  It remains interesting that, of the two recommendations made, the City has chosen to only follow one of them.  The other–an exhortation to find a safe open water swim area within the Kelowna–has, to date, been given no traction.

Finally, in recent years, the Manteo resort has installed several new large white buoys along the outer border of its marina, as an indication for boaters to not get too close to the new dock built there.  Some swimmers have found that this inside pathway (between the buoys and the dock) leading to the boat gas station in front of the Eldorado to also be a safe way to extend an early morning swim.  If you consider this open water swim, you are again swimming at your own risk: Swimming with others and with a personal swim buoy are both strongly recommended.  This swim would add approximately 500m more as an out-and-back from the Manteo Mile turnaround buoy. 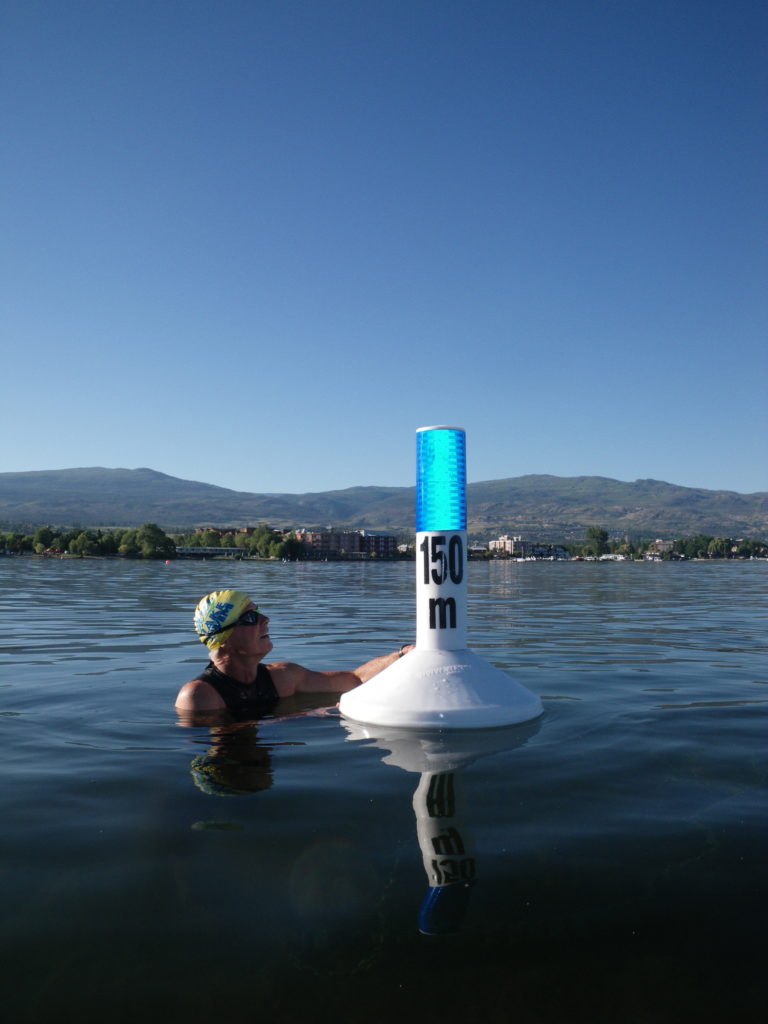 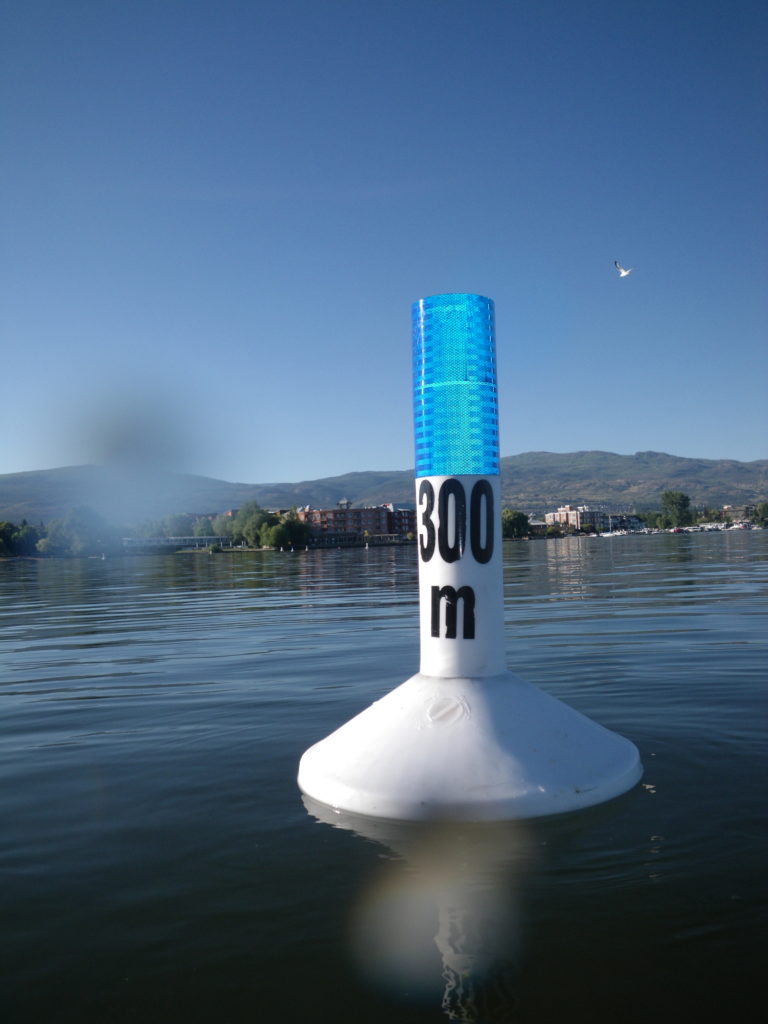 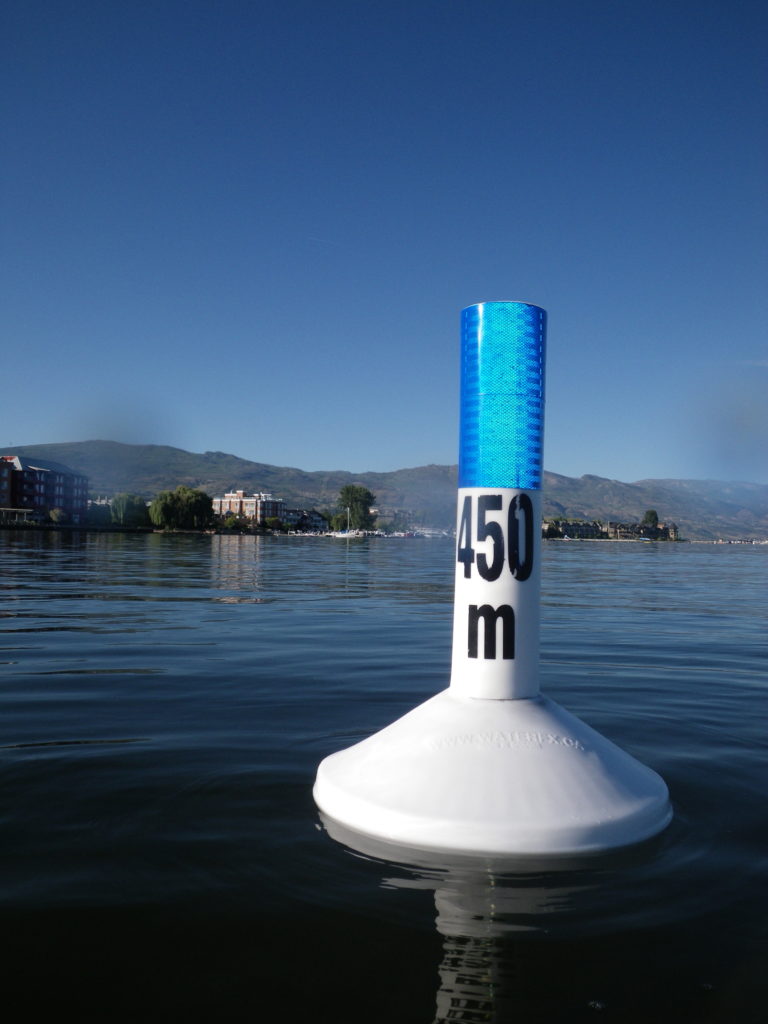 And for even more adventure…

So you’ve been doing the Manteo Mile for a while, your fitness is improved, you are wanting some extra distance, it is warm and calm, it is early morning with no boats anywhere on the lake, and you are at the Manteo end of the course.  You notice that there are some more white buoys with black stripes on their tops to the south of you, skirting the edge of Manteo’s new docking areas, and extending to the front of the Eldorado Hotel’s marina (You can see the Eldorado Hotel in the distance in the pictures above).

The Eldorado Extension. It turns out that you can easily add about 300m more to your swim (600m round trip) by swimming to the last white Eldorado buoy, which is next to the boat gas station and in line with the boat launch beside the hotel.  To be clear though, you must swim this route at your own risk, since it is not an established or recognized swim route–boaters would not be looking for, or expecting to see you. Hence, this route should be safe only in the early morning, and before the boaters and water skiers become active.  Using a Swim Buddy is also strongly recommended when doing this swim, especially if, on your return, you swim diagonally across back toward the Gyro Swim Loop, as opposed to returning to the Manteo Mile turnaround buoy.

Add the Watt Road Beach Access. Another way to add to your Gyro Loop  swim is to start your swim at the Watt Road Beach Access, which is about 300m north of the north end of Gyro Beach.  There are several parking stalls there, and there is a wide sandy beach without any weeds to start a swim south toward the Gyro Loop.  Like the Manteo Mile, this swim passes in front of several homes that have docks with power boats both in the water and on hoists.  Although early morning swims along here would very rarely come across launching boaters, you must keep your eye out for the possibility, and, again, swim this route at your own risk.

Outside of the Gyro/Rotary area, lots of other open water swims are easily found.  Consider swimming from the new Bluebird Beach Park to the Central Okanagan Small Craft Sailing club; or from Sarsons Beach to the mouth of Bellevue Creek; along the buoys at Cedar Creek Park; or from the north to the south end of Bertram Creek Park.  Although all of these swims are at your own risk, and are not officially endorsed by any group, they are all shoreline swims that are usually very safe to do (most are even walkable), especially early in the morning, or in the shoulder seasons like May and September/October, when boat traffic is usually very light. Always have someone with you, and strongly consider using a Swim Buddy for added visibility.